Idyll Time, a Kadey-Krogen 48, Explores Meyers Chuck, Alaska, One of the Most Remote, and Beautiful, Spots on the Inside Passage

Jeff and Susie Parker have come a long way from their home port in Chattanooga, Tennessee, on Idyll Time, their 2006 Kadey-Krogen 48 North Sea Trawler. When we visited them last year, they had transported the boat to the Pacific Northwest. In May, they picked it up after some winter’s work in Sydney, British Columbia, and headed north.

Now they’ve just left Meyers Chuck, a large protected cove on the Inside Passage above Ketchikan, Alaska. I’ve been there a few times, and it’s one of the most beautiful and intriguing spots in that part of the world. The only way to get there is by boat or float plane. 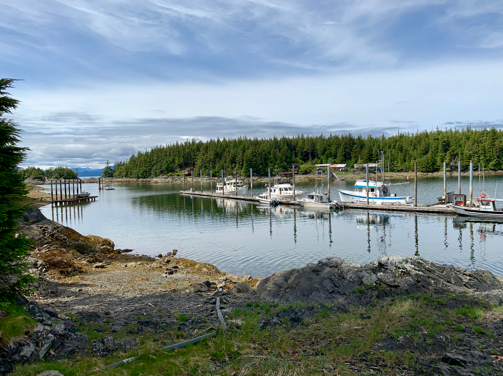 Chuck, it turns out, is the Chinook word for saltwater lagoon; I don’t know the derivation of Meyers. In any event, the area was settled by Scandinavian fishermen after the Second World War who primarily lived on their boats, although some built cabins on shore from salvaged wood.

Today there are 49 cabins in greater Meyers Chuck, but only four are lived in year-round. There is no electricity; everyone has generators. Once there was a general store, but it’s now a private cabin. The Post Office is in a cabin on one side of the harbor; mail comes in once a week on a float plane.

Like everyone else, the Parkers entered Meyers Chuck through a small, but marked, entrance, and then found themselves in the oval harbor, with the town dock at its head. 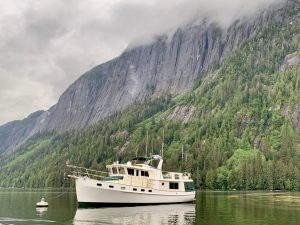 They dropped the hook, got in their 11-foot Boston Whaler and ended up exploring the area. They found the local art gallery, but it was closed. They also found the community shed, which was open and stocked with DVDs and books for the taking, plus volunteer fire, rescue and EMT equipment. An old homemade playground, with a slide and a jungle gym, was in the woods.

Back at the dock, they did meet Casey, the post mistress, who has lived in Meyers Chuck with her husband, Steve, for 54 years. They had just returned from a trip to Wrangell on their fishing trawler. As the Parkers wrote on their blog, Casey and Steve “are unique and independent individuals.” Read more on their blog: www.idylltime.com